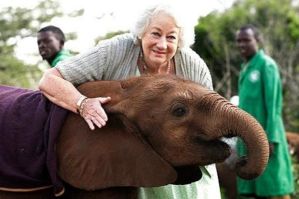 With great sadness we announce the passing of Dame Daphne Sheldrick, DBE. She was  leader in wildlife conservation for over 60 years. An author, conservationist and expert in animal husbandry. Co-warden of Tsavo National Park and created the David Sheldrick Wildlife Trust in Nairobi, Kenya. A pioneer to save orphaned elephants, rhinos and many other species.

The WCFF mission is to inform, engage and inspire wildlife conservation through the power of film. Join us for our eight year anniversary October 18-28, 2018. Ten days with over 100 documentary films screened, many World and North America premieres. Panel discussions, receptions, field trips, networking, virtual reality/360 and more. All Access Film Festival passes are available now for purchase: wcff.org/nyc-festival-2018/
Contact: info@wcff.org to join the planning committee. Sponsor the film festival, advertise on the big screen during the outdoor summer series and the October festival. Take a page in the full color program book to be distributed in USA, China and other countries.