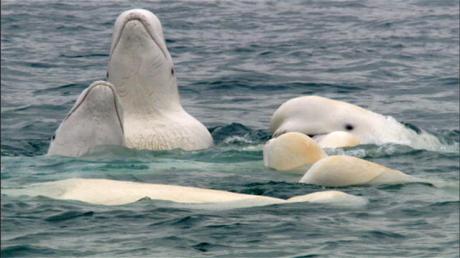 The occurrence of human diseases in marine mammals is rapidly on the rise and an alarming development for our oceans. The latest species to succumb is the canary of the sea: the beluga whale. Researchers from the University of British Columbia recently discovered Toxoplasma gondii, a devastating parasite, in a western Arctic population of beluga whales.

Usually found in cats, this parasite can cause blindness and other effect in human, although the effect on whales is not yet known. Some scientists attribute the wide-range movement of pathogens to the warming Arctic conditions, but the exact cause of this pathogen found in Belugas remains a mystery. One theory that has been discussed is cat litter that is flushed down toilets carry the pathogen into sewers and some sewage leaks into the oceans.

The discovery of this pathogen is of concern for the indigenous people of the Arctic, the Inuit who eat whale meat as a staple of their diet.

The Inuit hunt beluga whale. It is a vital part of their nutrition in their diet

Beluga swim in pods, at times in the hundreds during the summer months in the Arctic.