“Oceanic Aliens”, produced by Mike Johnson, will be a World Premiere at the 2017 WCFF in New York, NY this October. 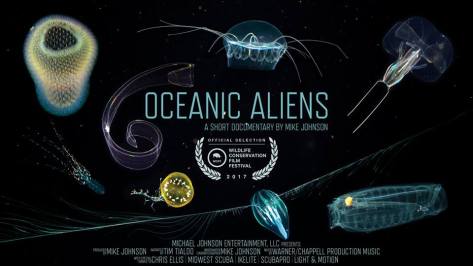 More is known about outer space than our very own oceans. This short documentary illustrates just one example of little known class of marine species and their amazing attributes.

“Oceanic Aliens” is a short documentary compiled from two Pelagic Black Water dives in Kona, Hawaii. Johnson was able to research and identify many of the creatures that appeared in such startling beauty in the film.

Join us for the 7th year anniversary of the WCFF. October 19-29 in New York. Ten days of film screenings, panel discussions, receptions, field trips, conference and weekend retreat with film producers and scientists. WCFF is the only film festival on the planet whose mission is to inform, engage and inspire wildlife conservation and the protection of global biodiversity.